CFPJ- Reminder about special issue call for papers on “Trade and Conflict: Trends in Protectionism and Isolationism”Policy Talks Podcast Episode 38 – The Iran Nuclear Deal: U.S. WithdrawalWhere to Draw the Line in Ukraine: Is A Peacekeeping Mission Possible? Necessary?What Can Be Done to Prevent Vehicle-Ramming Terrorist Attacks in Canadian Cities?Canadian Foreign Policy at Mid-Term: Reset, or Recycled?Jez Littlewood on Bill C-59 and what it means for Canada’s national security
Your RatingUser Rating: 0 ( 0 votes )

Academic discussion on the subject of nuclear weapons has been dominated for the past two months by the surprise announcement on March 8th that the US would hold talks with the North Korean government about its nuclear program. (Even most officials in the Trump administration were surprised!) There’s been considerable discussion about the talks, given the… belligerent rhetoric and actions on both sides. Some believe that North Korea has no intention of actually conceding anything in these talks, with Kim Jong-Un’s goal actually being to use a meeting with a sitting US president to gain further prestige (something that his father and grandfather also tried, with little success). It’s also been suggested that the Trump administration may also be insincere about its diplomatic outreach, and could just deliberately setting up the talks for failure to justify attacking North Korea (something that I’ve previously written about and criticized as a bad idea). This is admittedly a real possibility, given that H.R. McMaster has been replaced as national security advisor by former UN ambassador John Bolton, a.k.a. the manwho never saw a potential war he didn’t like.

One particularly notable aspect of these upcoming talks is that both parties involved seem to have very different understandings of denuclearization. The North Korean government’s stated goal is to achieve the “total denuclearization of the Korean peninsula.” President Trump and his administration, on the other hand, are aiming for North Korea’s denuclearization. Admittedly, these sound like they both mean that North Korea is willing to talk about giving up its nuclear weapons. The reality is that the inclusion of “the Korean peninsula” changes the meaning considerably. The Trump administration’s understanding of the situation seems to be that North Korea would give up its nuclear weapons and the associated delivery systems (like their apparent ICBM capabilities) and would then accept international inspections to ensure that they don’t try to develop nuclear weapons again in the future. If Kim Jong-Un and his government are looking for the entire peninsula to denuclearize, however, it would mean not only giving up their nuclear weapons, but for the US to remove whatever nuclear weapons it has defending South Korea.

Both of these interpretations are problematic in their own ways, though the latter is outright dangerous. If North Korea did agree to give up its nuclear weapons capabilities, which is incredibly unlikely given their perceived necessity for the regime’s continued survival, actually ensuring they fulfil such an agreement would be challenging. There’s a whole body of academic literature that explores just how hard it would be to verify that a state has actually dismantled its nuclear arsenal (though this is largely theoretical due to South Africa being the only country to actually do so). It would be especially problematic with North Korea, which had previously agreed to dismantle its then-nascent nuclear weapons program in the 1990s with the Agreed Framework and ended up reneging.

Even if Kim Jong-Un agreed to denuclearize, he would almost certainly demand significant concessions by the US to make up for the fact that North Korea would become a lot more vulnerable. This could mean demanding a pledge from the US to avoid placing nuclear weapons or missile defence systems in South Korea, or potentially even reducing the number of American troops present on the peninsula. Even if Trump agreed to such a demand (which is in the realm of possibility, given his past rhetoric on having allies fend for themselves), the South Korean and Japanese governments would probably have serious problems with it. After all, both states have been under constant threat from North Korea, with South Korea being especially vulnerable, though South Korea has been making major diplomatic overtures recently, including a proposed end to the Korean War(which is technically ongoing despite an armistice being signed in 1953). Withdrawing US forces, nuclear or otherwise, would potentially be beneficial for the US by reducing the threat posed by North Korea to its own territory, but would be very damaging to its foreign relations in the region due to essentially abandoning its allies. It would be preferable, as scholar and former would-be ambassador to South Korea Victor Cha argues, for the US to offer energy and economic assistance to North Korea in exchange for freezing its nuclear program, which would help in normalizing relations with less risk of alienating South Korea and Japan.

But let’s assume that Trump decides he doesn’t want to give up anything to North Korea in exchange for it abandoning nuclear weapons (which is unfortunately all too plausible). What could this apparent confusion over denuclearization mean for the US-DPRK talks? According to nuclear deterrence scholars like Vipin Narang, it could very well mean disaster. If the talks end up failing because North Korea refuses to abandon its nuclear weapons (which, and I can’t stress this enough, would be the likely outcome), it would provide a justification for war hawks in the Trump administration to launch a preventive attack against North Korea. And as anybody who’s spent time studying the situation would tell you (including me!), that would almost certainly lead to large numbers of people being killed in the resulting crossfire. 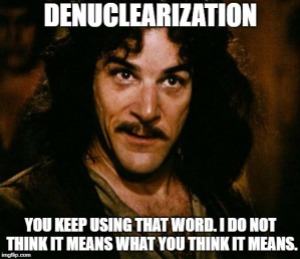 Mark Haichin is a PhD student with the Norman Paterson School of International Affairs at Carleton University. He has a Masters in International Relations (Research) from the London School of Economics, UK. He specialises in issues relating to nuclear deterrence and proliferation. In addition, he has strong research interests in terrorism, ethnic conflict, and international relations.

This article is a cross-post from Mark’s Policy Musings.

iAffairs is an online hub produced by students of the Norman Paterson School of International Affairs (NPSIA) at Carleton University. We have created a comprehensive online network that can facilitate academic discussion by engaging the diverse international affairs community in Canada and around the world, with a specific focus on students, emerging scholars, and young professionals. iAffairs is supported by the editorial staff of the Canadian Foreign Policy Journal (CFPJ).
END_OF_DOCUMENT_TOKEN_TO_BE_REPLACED